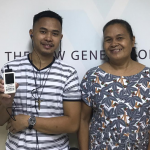 Jimboy Lanojan, aged 28, has profound hearing loss on both ears. His left ear was diagnosed as deaf ear because it had no response in hearing test.

Jimboy bought five hearing aids of other brands from online shop but none of them worked for him.

When Jimboy and his brother visited our hearing center and tried our EasyHear Total Communicator, his brother was amazed that Jimboy could hear and recognize speech clearly in both ears.

Jimboy has been bullied by his peers and other people since he was 5. He appears shy due to his hard of hearing. Jimboy is blessed because his mother does all her best to buy him the Total Communicator as a present.

For Jimboy and his family, quality hearing aid is very important. If the ordinary ones could not serve him, it is simply a waste of money.

Thanks to the sharing of Jimboy.